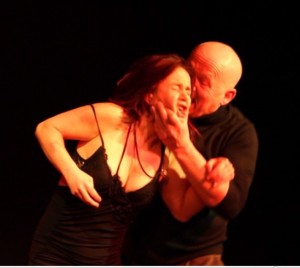 “…an incredible performance by Suzanne Lakes, one that must surely have drained her, as it did add two small cuts on her knees; her commitment to the character and the piece itself is total…”

“Suzanne Lakes also puts on an exceptional performance as Paula, a heroin addict. In the second scene of the play we see her rise from her bed suffering from withdrawal symptoms. Lakes pulls off a phenomenal performance in which she is seen shaking, vomiting and weeping. We see many of the emotions and stages which a heroin addict goes through, from needing a fix to believing they can go without it.”

“…Lakes is very impressive in a physically-demanding role that involves writhing, vomiting, weeping and a lot of talking on a mobile phone. We see so many stages of a drug addict’s condition in this scene: Paula’s wilful delusion that she’ll be well enough to attend the ceremony, her coy cleverness in pursuing her fix and most graphically, her unsettling physical need for the drug. Ronan also plays Leo, a pimp and drug dealer, and while one sometimes wished for a bit more subtlety in the portrayal of his sadistic relationship with Paula, this is a play that takes an unflinching look at heroin abuse – subtlety is perhaps a secondary concern…”

“Mammy’s Boy was my favorite piece of the evening: a woman and her sister go to the fancy restaurant where her son has just gotten a job as a waiter. Hilarity ensues. Beautifully written by Suzanne Lakes and performed by her, Ciara McGuinness and Elijah Egan, it was funny and true and I laughed like a maniac.”

“Act two saw the welcome return of an important voice in emerging lesbian writing Suzanne Lakes with the world premiers of Mammy’s Boy. Lakes and Ciara Mc Guinness broke new ground as ‘Mammies’ in this hilarious comedy that everyone who ever saw Dublin variety sketches at their best could relate to. Finally Lakes is more than back on track both as an actress and a writer and her razor sharp humour has you on the floor at times all at the cost of a very fine Tim played by Elijah Egan as he faces a duo who act more like culinary terrorists with hilarious consequences. Not to be missed and a great addition of Dublin humour to the festival.” 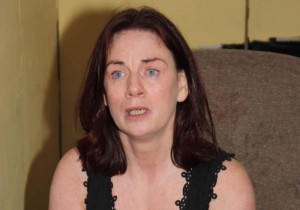 “While only Suzanne Lakes manages to convey the darkness of Beauty Queen, the set design is spot on. The requisite iconic pictures of JFK, Mother Teresa and The Sacred Heart adorn the walls. The kitchen-cum-livingroom is appropriately bereft of luxury and dominated by the television set and the radio. The Complan and porridge, Mag’s staples, are suitably indigestible-looking…”

MARINA Carr’s latest play, Ariel, confirmed her as Ireland’s mistress of the dark, a playwright with an obsessively bleak vision of rural Ireland as a place of broken parentchild relationships, sexual perversion, deaths, hauntings and general misery. These themes are strongly in evidence in her previous play, On Raftery’s Hill, currently being performed in a debut production by the new theatre company Sense!

Sense! is quality on display in this production, which features some solid performances on a simple, effective set, and is as restrained as it could possibly be given the appalling subject matter of the play and the fact that it is written at a heightened dramatic pitch from the outset.

Raftery (Paul O’Flaherty) is a widowed farmer, “with stinking carcasses in every field” – and stinking skeletons in every closet. His mentally defective son Ded (Ken F Kelly) has taken to living in the cowshed – and by the time of his late outburst “There’s nothing wrong with me . . . Fucking perverts the lot of yiz, ” we start to think that maybe he’s got it right. Raftery is involved in an incestuous relationship with his elder daughter Dinah, movingly played by Suzanne Lakes as a woman understandably embittered with the world. Her habit of taking out her frustrations on those around her belies the fact that Dinah has sacrificed her life to protect her younger sister, her simple plea “Don’t touch Sorrel” sending shivers down the spine.

“The actor who can hold the attention of an audience, on an almost bare stage, with nothing but the writing and their own talent to depend upon, is a skilled individual. The double bill of “coming out” tales in the Teachers’ Club showed to varying degrees the demands of such formats and their impact when they are successful. Verity Alicia Mavenawitz’s tragic comedy certainly doesn’t pull its punches. It is raw and brutally honest. One certainly might excuse all the anti social behaviour of the central character, like failing to pull your weight at work, theft from home and colleagues, bingeing, drug taking etc. if a person was in turmoil about coming out, but in this tale it is different.

Suzanne Lakes’ character doesn’t really struggle so much with the coming out – it’s being out and the continual mental struggle against the negative images of lesbianism that have been drummed into her that cause the pain and the lashing out. There are colourful episodes and language in this show and at times a little more contrast in delivery and mood would have helped. We rarely had a quiet or thoughtful moment – instead it was a constant anger that Lakes maintained with conviction and authority throughout the hour. She has quite a heavy Dublin accent (for a sibling of a student nurse and a building society official!), but it was used to effect in calling a spade a spade.

Director Nuala Kelly did a fine job with just a few inconsistencies in approach, in that most scenarios were mimed to good effect, except the final drug overdose that interrupted the natural flow of the piece and that jarred a little. “And Then There Was Me” had a significant achievement in bringing the unique and rich qualities of lesbian life to the forefront of a gay theatre festival in a strong, serious, powerful and accomplished way. The piece is very well written, directed and performed as the combined talents of “the three wise women” were put to worthy and worthwhile effect.” 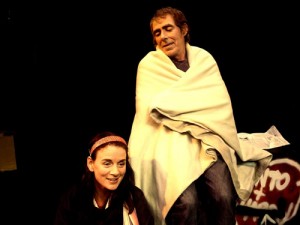 MY NAME IS MARY